To help support the research efforts of the National Science Foundation in Antarctica, a new Komptech Terminator single-shaft waste shredder will be used during the modernization of facilities at McMurdo Station.

Very few companies can claim their products can be found on every continent. Now Komptech can say they are part of that elite group.

McMurdo Station is the largest research facility on the southernmost continent. Originally built in the 1950s, it is now undergoing a major construction upgrade effort. The Antarctic Infrastructure Modernization for Science (AIMS) project is a multi-year effort to provide more energy-efficient buildings and increase logistical efficiencies.

The National Science Foundation-managed U.S. Antarctic Program supports research that cannot be performed anywhere else on earth. McMurdo Station serves as the hub for scientific study ranging from biology and astrophysics to glaciology and paleontology.

The Antarctic Treaty system includes U.S. laws that regulate environmental protocols, including the concept of “leave no trace.” Therefore, all the debris from the demolition of existing buildings must be removed from the continent and shipped back to the United States for disposal or recycling. The new Komptech Terminator low-speed, high-torque shredder at McMurdo Station will provide volume reduction of material for transport off the continent. The Terminator is a universal industrial waste shredder capable of shredding tires, mattresses, carpeting as well as construction and demolition debris (C&D). The unit’s single 9.5 ft shaft produces over 165,000 ft-lbs. of torque to shred even the most difficult items. 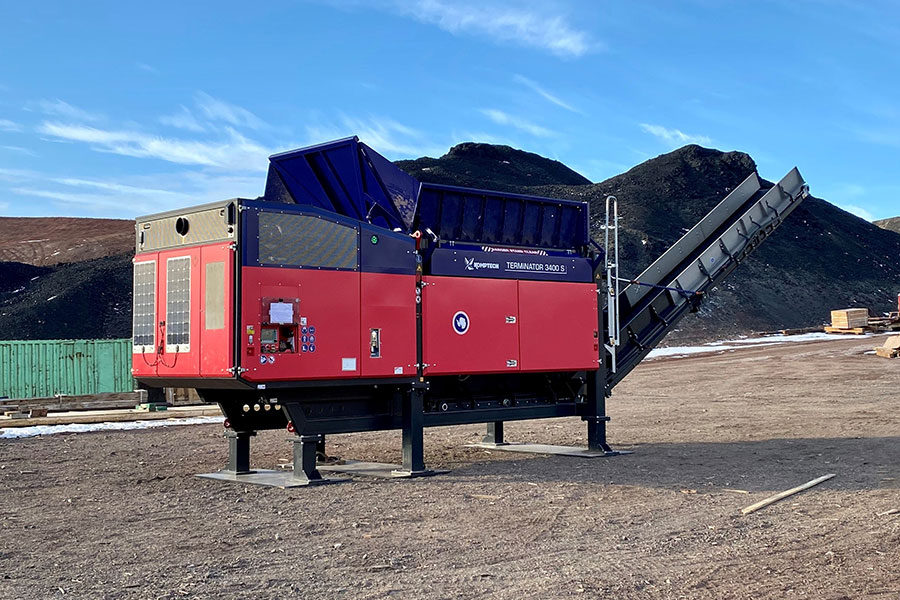 The conditions on Antarctica aren’t ideal for any machinery. Antarctica is the windiest, coldest and driest continent on earth where hurricane-force winds are common, and winter temperatures will reach -30°F. A shredder working outdoors in these conditions must be built specifically for this harsh environment while being efficient and environmentally friendly. The Terminator meets these requirements in a very small footprint.

This Terminator shredder at McMurdo Station is equipped with heaters, solar panels and is painted in the colors of the National Science Foundation. The engineers at Komptech went a step further and programmed a penguin to display the warmup status of the machine. In Antarctica, penguins are the most common bird living in colonies that would rival the population of some cities, according to the British Antarctic Survey. 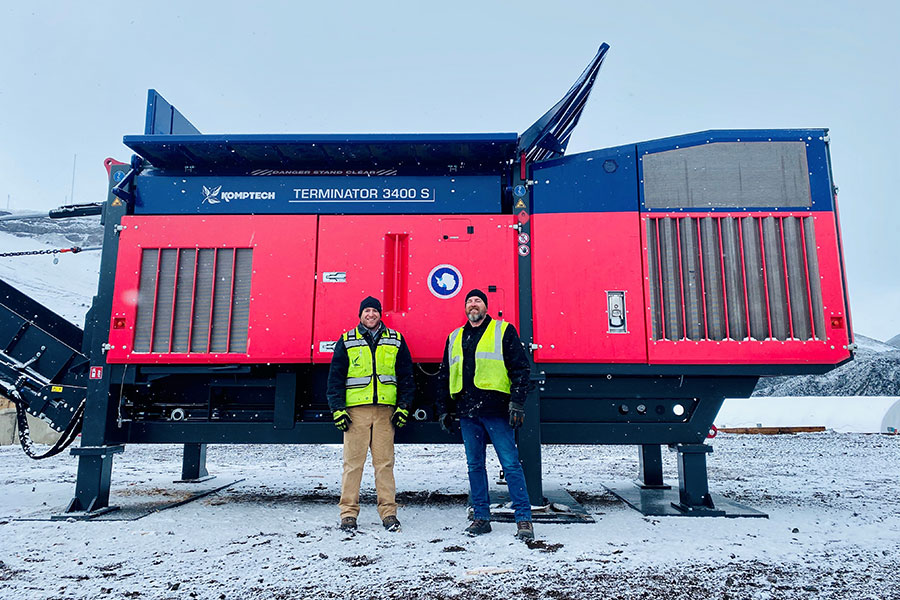 Todd Dunderdale and Auguie Henry of Komptech Americas with the new Terminator 3400 S shredder in Antarctica.

One could imagine support for a machine like this to be a challenge, as there is only one resupply vessel to the continent per year and any cargo that misses that ship would have to be flown in by the U.S. Air Force which is a much more expensive option. Komptech Americas provided this machine with a large parts pack that was carefully planned out to account for wear parts and maintenance to keep their Terminator running at its best. The CAT® engine was also outfitted with a CAT link, so diagnostics can be provided from anywhere in the world.

Komptech GmbH and Komptech Americas are honored to partner with the National Science Foundation to provide technology for a better environment.

ABOUT THE NATIONAL SCIENCE FOUNDATION

The National Science Foundation (NSF) is an independent federal agency created by Congress in 1950 “to promote the progress of science; to advance the national health, prosperity, and welfare; to secure the national defense…” The NSF supports basic research and people to create knowledge that transforms the future. Visit their website at: https://www.nsf.gov

WANT TO KNOW MORE ABOUT THE TERMINATOR?

TALK WITH OUR WASTE SHREDDING EXPERTS

When it comes to shredding waste, our team is ready to help you accomplish more by delivering industry and product expertise combined with world-class parts and service support. How can we help you?